Cuba has a tropical marine climate with temperatures averaging 20-26C for most of the country with very little fluctuation in weather change, at least by European standards. The seasons can be roughly divided into dry season, which runs from November to April, and the wet one - from May to October.

Generally the weather is hot and sunny due to the north-east trade winds which keep the weather comfortable for most of the year. The Eastern provinces enjoy a warmer weather than the western ones and the variations of temperature between the day and the night are less accentuated in the coastal regions that in inland.

In dry season, completely cloudless days are more common although average temperature is slightly lower. Because of its proximity to North America the cold fronts with its heavy rain, restless sea and strong winds are not unusual in this period, though they are not so frequent either. The temperatures are at its lowest then but still quite sustainable by an average westerner. Nevertheless, you can still expect a good seven hours of glorious sunshine with a relatively low humidity.

The pleasant weather extends to the wet season when average temperatures rise as well as the average rainfall and humidity . The rainfall figures (1400 - 1600 mm) do look high, but they are result of a high-intensity, short-term showers which can be quite exciting and refreshing, rather than steady, British-style drip which are annoying and boring. Even in the wettest months, however, most days have dry and relatively clear weather.

Cuba is in the hurricane belt, although chances of it being hit in a particular year are relatively low. Satellite system gives you several days' warning and established procedures based on experience give you maximum protection. Hurricane season is considered to be from May until November. 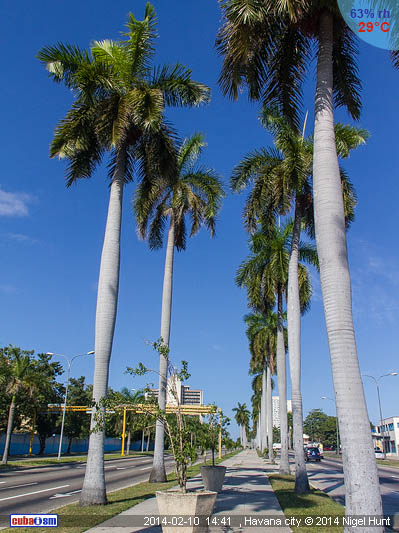 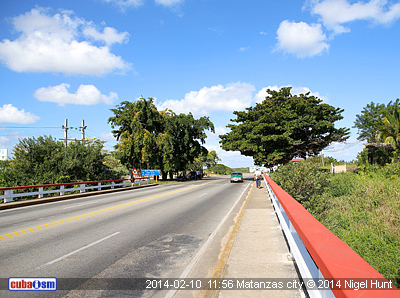 The average temperature in winter is about 70 degrees Fahrenheit or 21 degrees Celsius.

Annual rainfall averages about 1320 mm (about 52 in.) More than 60% of the rain falls during the wet season, which extends from May to October.

The island lies in a region occasionally traversed by violent tropical hurricanes during August, September, and October. 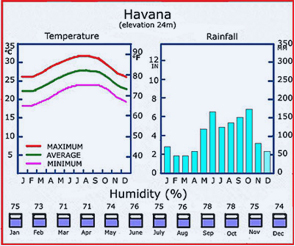 Did You Know?:
We think that April & May are the best months to visit Cuba!